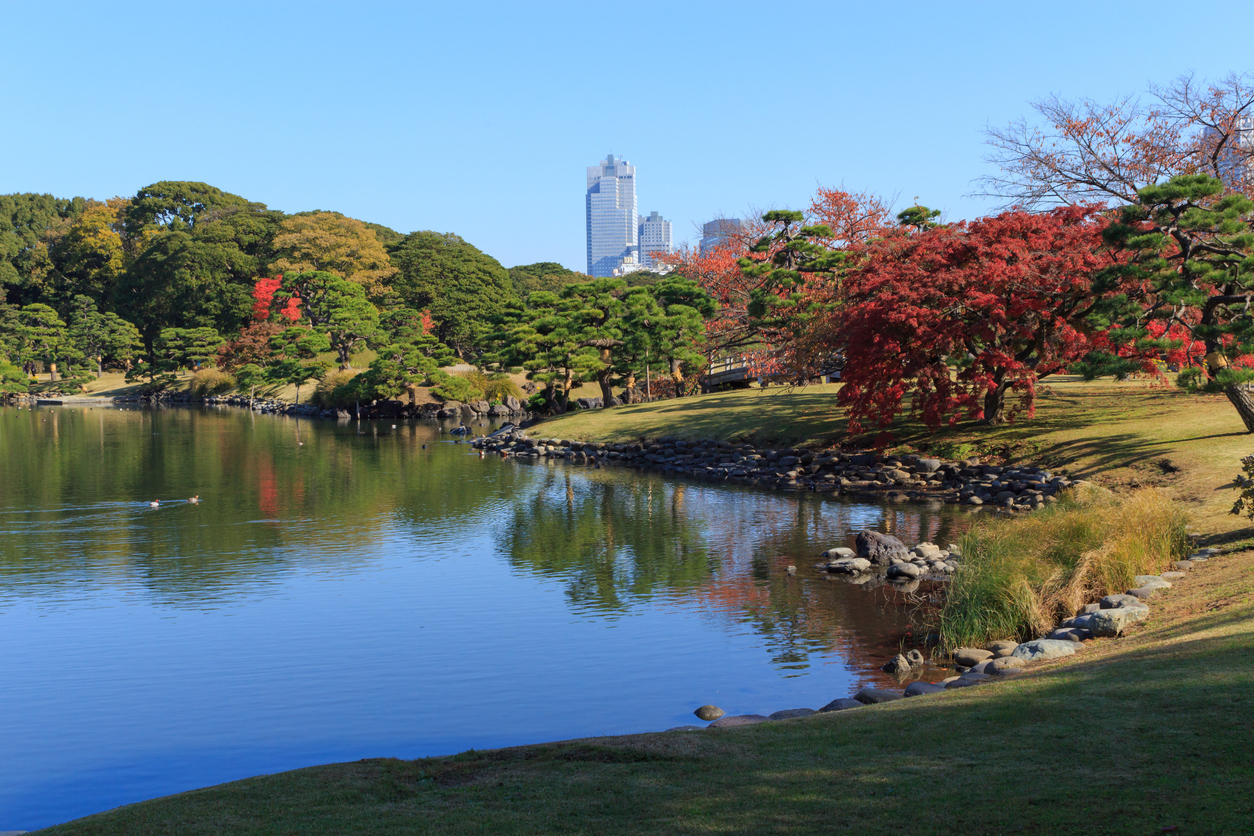 Without having to battle the hordes at the Imperial Palace, get a refined glimpse of a traditional Edo garden.

After the Meiji Restoration, Hama-rikyu served as a second residence and villa for the shogun and the Imperial family. Its most notable feature is its seawater pond, Shiori no ike, which is the only remaining seawater pond in Tokyo and home to a variety of aquatic life.

Visit the Nakajima no Ochaya (Nakajima Teahouse), which is located on an island in the pond. For only 500 yen, you may savor a cup of matcha (green tea) and a traditional Japanese confection, but the opportunity to be in the same setting as shoguns and Imperial officials centuries ago is invaluable.

The Hama-rikyu Gardens, like most Japanese gardens, have been meticulously kept so that you can enjoy lovely blooms and greenery in any season, even in the winter time. The flower field is blanketed with 300,000 blossoms and cosmos in the spring and fall, respectively, while the peony garden next to it has over 800 varieties of flowers that bloom all year.

The 300-year-old pine, a giant of a tree planted to commemorate the garden’s renovation in the 1700s, is, of course, always worth a visit near the Otemon entrance.

If you’re interested in history, Hama-rikyu has remnants of its nearly four-century past strewn throughout, but many of them are reconstructions of their original shapes (devastated by the bombings during World War II and the Great Kanto Earthquake.)

Hama-rikyu was also used as a duck hunting site for shoguns and Imperial family members. The two hunting sites, which are each about 300 years old, have been preserved, and some of the duck blinds used in the sport have been reconstructed.

Shinhi no kuchiyama, at the summit of the hill, offers a unique perspective of Tokyo Bay and the Rainbow Bridge. (Winter bonus: due to the early wintertime sunsets, you might be able to experience the bridge’s unusual winter rainbow lights from a unique angle before the park shuts at five o’clock.) The gardens provide free self-guided audio tours in a variety of lengths ranging from 60 to 90 minutes, as well as guided group visits.