Home » Kyoto’s Best Off The Trail Side Trips

Kyoto’s Best Off The Trail Side Trips 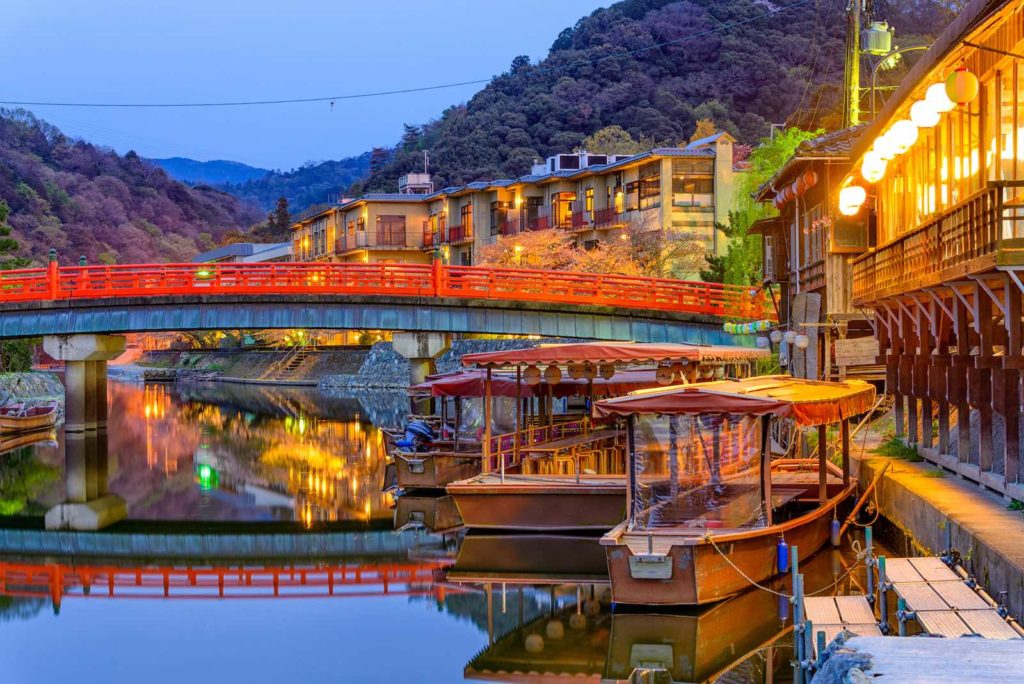 Kyoto has much more than just shrines and temples.

As an excellent starting location for day travels, mountains and old towns surround the city, making a day trip to the coast and back to downtown a breeze. Unfortunately, because Kyoto is such a famous tourist destination, many of the city’s attractions and surrounding towns are sometimes missed.

It’s time to get out of the tourist areas and see what you’ve been missing out on.

Arima Onsen, one of Japan’s oldest and most beautiful onsen villages, is nestled on the northern side of Mount Rokko and surrounded by pristine forests. Because of its location between heavily populated Osaka and the mountain’s untamed volcanic zone, its environment was suitable for natural hot spring cultivation.

Arima Onsen is steeped in tradition. Its origins may be traced back to Japan’s second-oldest book of ancient records, the Nihon Shoki. Monks on pilgrimages in the 12th century drank in the mineral-rich springs to relax their aching muscles. Arima Onsen is now virtually a secret spa resort, with tourist-friendly amenities like food booths, gift shops, restaurants, and both modest and luxurious onsen baths.

Tamba-Sasayama is a charming former castle village with plenty of traditional Kyoto architecture but none of the crowds. Tamba-Sasayama joined with neighbouring Konda, Nishiki, and Tannan in 1999, and was previously known as Sasayama. The town has mostly avoided major industrial expansion, allowing it to maintain much of its Edo-era charm.

The former samurai quarter of Tamba-Sasayama still has a substantial commerce sector with old storehouses and stores, some of which are hundreds of years old. While Tamba-Sasayama is steadily gaining popularity among tourists, it is well-known in the Kansai region for its delectable mountain yam, chestnuts, and azuki beans, as well as wild game such as wild boar and deer.

The pleasantly ancient, laid-back fishing village of Ine is one of Kyoto’s best-kept secrets. This seaside village, unaffected by considerable commercial development, gives Kyoto’s capital a run for its money in terms of stunning views. The boathouses, known as “funaya” in Ine, are the city’s most recognizable symbol. Funaya are similar to machiya, or traditional Japanese residences found in Kyoto, but with stunning sea views. They usually have room beneath them for the homeowner’s fishing boats. While the majority of the machiya are private residences, a handful serve as guesthouses, allowing tourists to experience life in the idyllic seaside village.

The mysterious Awaji Island is a Kyoto day trip that feels worlds away for the more daring sorts who wish to travel out even more. The island, which lies between Shikoku and Honshu in the Seto Inland Sea, is home to Tadao Ando’s unique architecture, an anime park, picture-perfect beaches, fascinating whirlpools, and the world’s longest suspension bridge.

The wonderfully gorgeous Naruto Whirlpools are not to be missed, and Goshiki Beach is one of the best sites to take in the Seto Inland Sea. Add a detour to Awaji’s Water Temple and Yumebutai International Conference Center if you have time. Both are stunning structures designed by Tadao Ando, a renowned Japanese architect.

How to get there: The travel takes roughly two and a half hours each way from Kyoto Station. The island is accessible by automobile, bus, or boat; however, there are no railroads on the island. Take the Tokaido-Sanyo Line Special Rapid from Kyoto to Nishi-Akashi, stopping at Sannomiya Station in Hyogo. Then take a highway bus to Awaji Island’s Sumoto City.

If you enjoy matcha (green tea) or tea in general, a visit to Uji must be on your bucket list. This quiet village, located halfway between Nara and Kyoto, is the home of Japan’s highest-quality green tea in all of its varieties. It’s a reputation Uji has cultivated for over 1,000 years, and it’s only one of the small city’s many accolades.

Head to Omotesando, the main avenue that feeds Byodoin Temple traffic, for a deep dive into the city’s food culture. There are numerous shops providing one-of-a-kind teas, Japanese sweets, and matcha-flavored delicacies there. You can’t go wrong with matcha soft cream, which is somewhat bitter but pleasant.